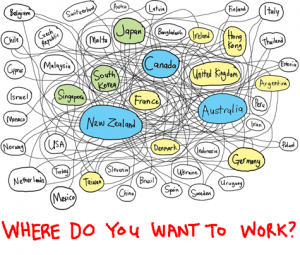 Visa type ~ 417
Not released until the end of March but advance details received by The Byte show that there is both good and bad news.  While Working Holiday Visa grants were down 14% for the four months ending October 2014 the decline flattened off over summer with only a 3% drop.

The TOP TEN in new order are: UK, Germany, France (replaced South Korea in 3rd), South Korea, Taiwan, Italy, Japan, Canada, Hong Kong and Sweden. Ireland, which was as high as 7th, has now dropped to 11th down 27% on last year and down a massive 60% since 2013. From what The Byte is hearing the Irish have stayed at home because their economy is picking up or more concerning have gone  to Canada where working holidays are nearer and cheaper.

The reality is capturing the attention of working holiday makers is now more competitive than ever before, Australia has the historical advantage but Canada and New Zealand are catching up and others will follow. Its ultimately the backpacker or working holiday maker that has the choice.

Visa type ~ 462
With regard to the Work and Holiday (462) visas, the US continues to grow steadily but is still well under 10,000 per annum. The original target for the US visa when launched in 2007 was 30,000, perhaps a more favourable exchange rate will help.

Late in 2015 the new working holiday visa for China (see https://www.thebyte.com.au/work-holiday-visa-chinese-youth/) is expected to launch, this being part of the new Australia-China Free Trade Agreement. Other new countries expected to come online in the scheme in 2015 are Vietnam, Israel and Greece

The 5,000 Chinese places are expected to go mighty fast and the quota compares favourably with the 1,000 places for China in New Zealand. And what of the working holiday scheme in New Zealand? The canny Kiwis have a visa fee of only NZ$165 so they are growing nicely thank you very much. That’s why the Australian Tourism Industry submission to the Joint Review of Border Fees, Charges and Taxes argued that the Australian Working Holiday Visa fee should revert to its 2012 figure of $280 from the current price of $420. That way Australia can remain somewhat competitive with both Canada and New Zealand.

A copy of that submission is here http://www.ttf.org.au/Content/borderfeesandcharges051114.aspx

The full report for the six months ending December 2014 is expected to be posted to the Immigration website by the end of March: http://www.immi.gov.au/pub-res/Pages/statistics/visitor-programme-statistics.aspx

So how do we remain competitive in the eyes of working holiday makers?
Time to launch yet another “Best Jobs in the World” campaign or do you have any other campaign ideas?

Written by The Editor