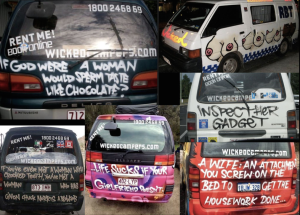 Brisbane-based car rental company, Wicked Campers, has issued a formal apology to the woman whose petition over an offensive van slogan sparked uproar, and has committed to change slogans of an ‘insensitive nature’ on their vans over the next six months.

Wicked Campers said it wished to acknowledge the prevailing community opinion by painting over the slogan ‘In every princess, there’s a little slut who wants to try it just once’, which Sydney mother Paula Orbea spotted while with her 11 year-old daughter in the Blue Mountains on 13 July.

Orbea launched a petition on Change.org which received more than 100,000 signatures in days. It came on the same day the Senate unanimously passed a Greens’ motion condemning the slogans, which have been described as racist, sexist and misogynistic.

Despite staunchly defending their signature graffiti-style artwork and refusing to respond to community demands in the initial aftermath of the petition, with Wicked director John Webb telling SBS that bad publicity was better and easier to get, and he was „happy to see” Wicked get marketed around the world because of the online petition; he then conceded and issued an apology.

„It is impossible for us to conceive that a throw-away message written on a van could have such far-reaching implications for the community at large”, said Webb in a statement.

„As is often quoted: ‘A sense of humour is a sense of proportion’. And in this instance, we admit that we have taken things out of proportion and out of the realms of what is considered to be ‘socially acceptable’,” he said.

The company also invited anyone who feels strongly offended by a slogan to paint or tape over it.

Wicked have been burnt before when the Advertising Standards Bureau upheld a complaint in March about their ‘fat girls are easier to kidnap’ slogan, and has been subject to numerous complaints in the past six years. This time, it seems Wicked may have pushed their luck too far.

However, last week Human Rights Commissioner, Tim Wilson, defended the right of the company to use offensive slogans on its vans. Despite the success of the online campaign, he said people who disapproved should protest by not using the business.

“Government shouldn’t be going around telling people what they can and cannot say, unless it leads to direct and explicit harm,” Wilson told the ABC.

“Just removing things that are offensive, while it may seem attractive, is a very dangerous precedent at least because people always have very different views about what is offensive and therefore should be limited.”

Do you agree removing advertising material deemed offensive is a dangerous precedent? Have your say.