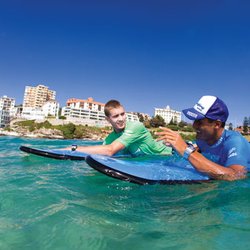 Inbound and domestic tourism are fast becoming the main beneficiaries of a weaker Aussie dollar, the falling Australian dollar, which has been at a 25% decline since mid-2014, this very good news for tourism businesses. The Aussie has fallen through US70c, and is at its lowest level since 2009. This is influencing more international tourists to hit our shores – and spend more on experiences while they’re here.  New findings from Tourism Research Australia last week showed a record amount of spending, the highest since the Sydney Olympics. The research showed a growth of 10% to $33.4 billion in the year ending June 30 2015.

Brenda Miley, the founder and surf school director of Bondi-based Let’s Go Surfing, said the company had never been busier.  “We’re experiencing about a 40% increase in our inbound markets of the US, UK, Europe and the China market that we are starting to get traction in,” she told the Sydney Morning Herald. “The lower Australian dollar is influencing people coming back to Australia.”

Tour operators are taking advantage of the demand by creating new tailored packages aimed at foreigners.  Let’s Go Surfing, whose bread and butter is surfing lessons, have expanded their business to offer tourists a unique perspective of the area, in and out of the water.  “Getting into the surf was a barrier for some people but they wanted to have an Aussie beach experience,” Ms Miley said. “We developed a dry tour that enabled them to learn about our history.”

Experts are predicting the Australian dollar could fall below US60c – its lowest value against the greenback since at least early 2003.

Ben Neville, the owner and operator of Off Piste 4WD Tours in South Australia’s McLaren Vale region, says he is also experiencing strong bookings and is catering this to the new market with packages aimed at cashed up tourists.  “With all of the market research we’ve done [the new high-end tours] seem to resonate quite well with what visitation is forecast for from those markets,” he said.

Should we be celebrating the weakening Aussie dollar? Have your say.