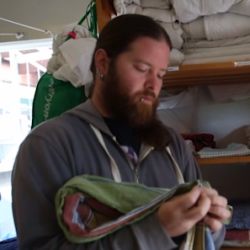 A backpacker industry veteran warns some hostels may close following a crackdown on the practice of giving young travellers free beds in exchange for work.

Eric Foley, founder of the 200-hostel network of Budget Backpacker Hostels (BBH), said the added administration around bed-for-board deals confirmed last week by the Labour Inspectorate could be the last straw for small owner operator businesses.

“It will be the hassle and bureaucracy involved in regulating every single volunteer worker that comes along and stays three to four days.

A Budget Backpacker Hostels survey of more than 2500 guests this year showed they stay in New Zealand for an average of five months. There are fears this will drop if work-for-bed exchanges die out.

Employers could still provide accommodation, the inspectorate said, but they had to pay minimum wage and could only deduct the value of board or lodgings by written agreement with workers.

They also had to pay holiday pay and meet their tax obligations.

British traveller Carl Duce and his partner Charlotte Warrener have been in New Zealand nine months, and they have so far earned about five months free accommodation by working unpaid in backpacker hostels.

Duce, who is currently working three hours a day doing laundry in a Christchurch hostel, said it helped stretch their budget and he was not concerned about issues such as being paid minimum wage.

“It takes the pressure off because we’ve not had to be constantly searching for work. All the places we’ve stayed have been brilliant. We can work a couple of hours a day and spend the rest doing what we want.”

Warrener, a debt manager, said New Zealand was more expensive than they had anticipated and when money got tight, the work exchange allowed them to stay longer.

“We wanted to have an experience here, but not end up working in the same jobs as back home.”

Although Dutch woman Maria Sonneveld​ is currently in a paid hostel manager’s position, she has done work-for-bed exchanges in Australia and Chile, and is a big fan of the system.

“It’s the cultural exchange that is so attractive for backpackers, the length of stay [working in a hostel] means that you get to know people.”

If they ended, there was a risk that backpackers would choose other destinations.

He said the Minister of Business, Innovation and Employment (MBIE) had not responded to his idea of creating a register of hosts and volunteers who agreed to conditions similar to those used by the Department of Conservation, Willing Workers on Organic Farms (WWOOF​) and Au Pair schemes.

“I believe MBIE​ has a duty of care to this valuable, if small tourism sector, when it considers decisions that have the potential to disrupt a well established tradition.”

Phil Leslie manages All Stars Inn, a 300-bed Christchurch hostel, and he said the extra costs involved in administering bed-labour exchanges would inevitably have to be passed on to guests.

“It’s a low margin business anyway. Once you start adding on substantial extra costs we are now facing, we have got to get it from somewhere and our only revenue stream is beds.”

During peak season he got “multiple people” a day asking for free beds in return for work.

However, the Youth Hostel Association chief executive Mark Wells has welcomed clearer rules around volunteer labour because of concerns about unfair competition from hostels that did not comply with the law.

“Their business model is their business, but the position we could take is that every operator should be compliant.”

Its happening in New Zealand, could it happen in Australia too?  They sure are targetting us at the moment (are we low-hanging fruit or something?). Have your say.