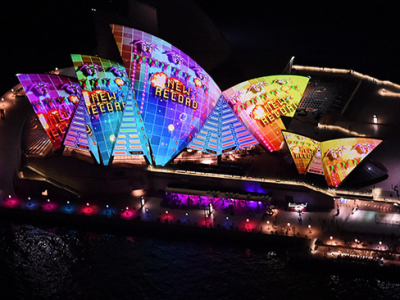 Sydney’s psychedelic festival of light, sound and idea’s ‘Vivid Sydney’ is breaking all previous records with more than 270,000 visitors welcomed during its first weekend, Deputy Premier and Minister for Tourism and Major Events Andrew Stoner has announced.

„Vivid Sydney is dazzling audiences once again, with opening weekend visitors up 170 per cent on last year,” Mr Stoner said.

„The festival of light, music and ideas just gets bigger and better every year, and visitors come to Sydney from across the State, Australia and around the world to see Sydney put on a show like no other.

„Of course the light installations and projections are always extremely popular, and in 2014 Vivid Light has increased its footprint dramatically, providing a unique perspective not only of favourites like the Sydney Opera House, Harbour Bridge and Circular Quay, but of new Vivid Sydney areas such as Martin Place.

„With just over two weeks of Vivid remaining, it certainly looks like the Festival is on track to generate significant visitor spend.

„Last year more than 800,000 people came to Vivid Sydney, which contributed over $20 million in new money to NSW,” he said.

„Vivid Sydney is also a huge hit with retailers, with many reporting double and triple the takings of a normal night. Ice cream is again proving to be particularly popular, especially with Sydney’s recent run of warm weather.”

Mr Stoner said that with crowds to Vivid Sydney building on the weekends, families should consider coming early in the week, and early on in the evening, with many installations on from 5.30pm including all of the light installations and projections at Martin Place.

„People should also consider splitting their visit to Vivid over several nights so they can see everything,” Mr Stoner said.