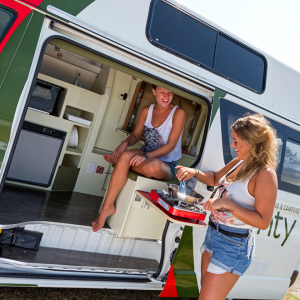 While their competitor may always be in trouble with the authorities about the quality and safety of their vehicles, thl is taking customer health and safety to a new level.

Tourism Holdings Limited – the largest operator of motorhomes globally has stepped up its commitment to Health & Safety even further by seeking and introducing independent and random safety inspections of their global commercial fleet. Tourism Holdings Limited (thl) is New Zealand’s largest provider of holiday vehicles for rent and sale in Australia and New Zealand under the Maui, Britz, Mighty, KEA Australia and Motek Vehicle Sales brands.

This safety audit is an additional step towards vehicle safety, beyond existing requirements and inspections will be undertaken by Vehicle Inspection New Zealand Ltd (VINZ) across New Zealand, Australia, the United States of America and the United Kingdom.

It is part of thl’s ongoing efforts to ensure optimum safety and compliance of all vehicles, provide better data about the fleets overall condition and deliver a higher quality and more consistent customer experience in all markets.

Says thl CEO Grant Webster, “quite simply, in the RV industry – the single biggest health and safety risk is moving vehicles. We do all we can to ensure the safety of our fleet – giving customers peace of mind along with other road users. This initiative is part of our continued commitment to having the safest fleet of commercial motorhomes on the road – both in New Zealand and around the world”

VINZ will carry out the inspections on-site at thl facilities, providing the equipment and staff in each location. The independent and randomly selected tests will form part of quality control checks as of next month – alongside already entrenched processes – including complete vehicle service and check by the onsite mechanic team as each camper is returned and before it leaves the site.

VINZ will provide the service directly in New Zealand and Australia, and will deliver the audits through other companies in Optimus Group (of which VINZ is a subsidiary) in markets where it does not have a direct presence.

“This agreement, and the work we have put into developing a service delivery and reporting model, represents an opportunity for VINZ to demonstrate its ability to provide customised inspection services on a global scale,” says VINZ Chief Executive, Gordon Shaw. „By working with other Optimus Group companies and their affiliates we can inspect to a global standard and also ensure compliance with regulatory standards in each sovereign market.”

Vehicles rented through Mighway, thl’s peer-to-peer campervan hire company, will also be part of the independent testing. Road Safety is absolutely paramount to thl. This partnership with VINZ is one of a number of initiatives in this space alongside the roll out of telematics in vehicles to influence navigation (driver behaviour), safety and vehicle problem diagnostics.

About VINZ – Vehicle Inspection New Zealand (VINZ) is a specialist vehicle inspection services provider of Certificate of Fitness, Warrant of Fitness, entry certification and pre-purchase vehicle appraisal inspections for private vehicle owners and fleet operators. It provides services in its 12 branch locations throughout New Zealand and on-site via a network of partnership arrangements with repair workshops and compliance centres.