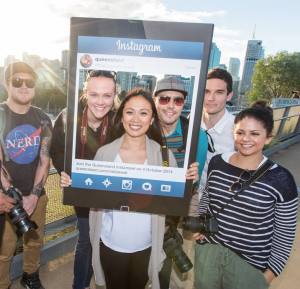 Tourism Queensland last weekend completed its first ‘Instameet’ with more than 6000 images of Queensland captured by 1085 Instagrammers who gathered in almost 90 locations across the state, making it the biggest event of its kind in the world.

“Queenslanders were joined by leading international digital influencers who had flown in to join the social media event from as far away as the United States, UK, Germany and France,” she said.

“This campaign supports the industry goal of growing overnight visitor expenditure from $15 billion to $30 billion by the year 2020. A series of pop-up galleries will now appear in the UK featuring images captured on the day in an effort to continue to inspire people to visit Queensland,” she said.

Meanwhile, Tourism Queensland and Flight Centre will be among the initial range of travel companies to display advertising via the social media juggernaut.

Tourism and Events Queensland director digital marketing, Chris Chambers, said the TEQ partnership with Instagram was a way for the state to increase the state’s reach into social media to influence decisions of travellers.

Flight Centre head of customer experience Keith Stanley said the platform was a way to engage with a community of passionate and aspiring travellers.

“Flight Centre’s mantra is to open up the world to those who want to see it. We are very excited to be a part of this Australian-first.”

Instagram users will retain control over their feeds, able to hide ads if they wish and to provide feedback if the approach doesn’t feel right to them. All sponsored advertisements will be clearly marked as such, according to the platform.

According to recent statistics [March 2014] Instagram has 200 million active monthly users worldwide with more than 60 million photos posted every day resulting in around 1.6 billion ‘likes’ daily.