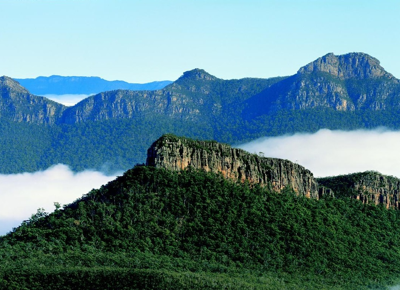 The proposed Grampians Peaks Trail will revolutionise access to the spectacular Grampians National Park, according to tourism industry pundits.

According to the master plan released in May, the planned 144-kilometre trail will stretch from the remote Mount Zero in the north of the park to Mount William in the centre, down to Dunkeld and the neighbouring plains in the south, creating a 13-day world-class walking experience and connecting some of the Grampians’ most spectacular peaks. The concept also allows for camps, lodges and tent platforms to be built along the trail.

Grampians Tourism says if it goes ahead, the trail will dramatically increase tourism, attracting an additional 23,000 people per year and more than 80,000 visitor nights by 2025 once completed. It is estimated it will generate $2.55 million in 2015, increasing to $6.39 million by 2025. Grampians Tourism also estimates the trail will directly and indirectly create 175 jobs during its construction and ongoing operation phases. While the price tag for the entire project runs at more than $26 million, those driving the plan say it will more than pay for itself in the long-term.

„It’s about introducing a new level of nature-based experience,” says Grampians Tourism chief executive Will Flamsteed. „It’s not only going to allow us to attract a new type of experience-seeker to the Grampians, it’s going to really allow us to broadly promote the whole of the Gramp­ians region. It will be a ‘game-changer’ for visitors to the Grampians.”

The project will be implemented in three stages. Stage 1A is currently nearing completion with funding allocated by the State Government. The full stage focuses on the central segment around Halls Gap. Stages two and three of the trail will be in both the northern and southern sections of the park.

Flamsteed said the project would require significant funding to establish the tracks and camping areas. Minister for Environment and Climate Change, Ryan Smith, said the government would not commit more money for its completion until it had seen what private investment the project could attract.

Grampians Tourism, Parks Victoria and Tourism Victoria first mooted the idea for the walking trail in 2010. Previously, exploration of the Grampians was limited, with only the most ambitious hardcore campers, hikers and adventure travellers willing to hike beyond the park’s pathways.

Advocates of the Grampians Peaks Trail say it will become a draw card for local and international visitors, in a similar way to Tasmania’s renowned Overland Track and the Milford Track in New Zealand.

The full Master Plan for the Grampians Peak Trail can be viewed at http://grampianstourism.com.au/strategies-publications/major-projects/grampians-peaks-trail/