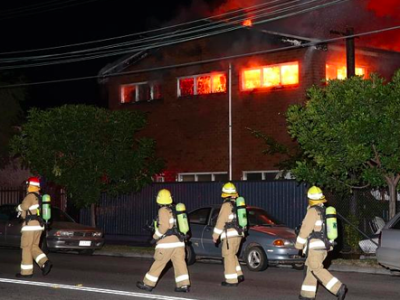 A massive fire at a Sydney industrial complex overnight has uncovered what appears to be an illegal backpacker’s camp.

Firefighters were called to a blaze on Burrows Rd at Alexandria, in Sydney’s inner-west, in the early hours of Wednesday, to what they thought was a run-of-the-mill industrial fire at a government property and bus depot.

But when people began running out from the back of the building, firefighters found themselves carrying out a rescue operation, according to latest news reports.Crews were able to rescue 14 people, believed to be from Korea and Japan.

“They were living in squalor. There were beds in old minibuses, a shipping container and an old caravan with a massive fire moving towards them,” said Mullins.

“I’m outraged that there would be something like this in the heart of Sydney. It looks like someone has been taking advantage of these people, maybe they were squatters – we don’t know yet.”

The fire started in building near the squatter’s camp, but investigators don’t think the group, aged in their late teens and early 20s, had anything to do with it starting. They have since been taken to alternative accommodation in Sydney

According to news reports, the owner of the property, who claimed to live on site, spent the morning exploring the smouldering damage alongside detectives.

It’s understood he knew the backpackers were lodging in his building, as he confirmed the headcount of people for the firefighters, however he refused to answer any questions about the unusual living arrangements.

Mullins said it wasn’t clear whether the operation was being run for profit. He said there would be penalties if it is illegal accommodation. Fire regulations in NSW were strengthened after the death of six young tourists at a Kings Cross hostel in 1989

But Commissioner Mullins said the Alexandria site complied with none of those conditions, with no smoke alarms, no fire exits and no proper sanitation.

“I have no idea whether this was a for-profit operation, whether it was family or whether it was people squatting, but if it was for profit there are penalties that can apply,” he said.

“We have powers to place orders on here to make sure nobody comes back. We will do that.”