Earning their keep: a glimpse into the backpacker experience 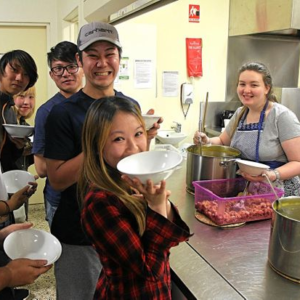 Each winter, the Lockyer Valley’s population swells as work-hungry backpackers flock to the ‘salad bowl of Queensland’ to help with the harvests. Between 2000-3000 extra hands are working on the Lockyer Valley’s farms during this time, the majority of who come to the Lockyer under the provisions of the Australian Working Holiday Maker program, which requires them to complete three months or 88 days of paid work in industries including agriculture, fishing and mining.

The program has attracted plenty of controversy, particularly around cases of worker exploitation, but the full story of how backpackers live and work in our rural regions isn’t so clear-cut.

We explored the various stories and perspectives of these transient workers and the people they trust to treat them fairly.

The Good
Sprawled on the grass at one of the Lockyer Valley Regional Council’s dedicated ‘back-packer barbecues’, Matthew Pilch could hardly wipe the smile off his face, despite his hard day’s work in the sun. “I love working outdoors,” he said. “For the last 10 years, I’ve worked in a factory and yeah, it’s hot and it’s pretty hard, but it’s an honest day’s work.”

The 27-year-old Briton said he arrived in Gatton at the beginning of August and found work within a week through a reliable contractor, who soon put him to work picking, packing and everything in between. “It’s definitely an experience, especially if you’re like me and haven’t worked on a farm before,” he laughed. Matthew was living in the Gatton Caravan Park while he completed his 88 days work, which homes a large portion of the Lockyer’s backpacker workforce during peak times.

Like many of his fellow travellers, he enjoyed a reasonably active social life in Gatton between the council-run barbecues, the Seventh-Day Adventist Church’s weekly soup kitchen (pictured), and socialising around the caravan park. One of his neighbours was German national Levin Ketelsen, who said he was also lucky enough to find work directly with a nearby farm through word-of-mouth. “I didn’t have to worry very much at all,” he said. “I wanted to work directly for the farm, because I think there is more security there because you’re just doing the one thing and you’re not changing around every day and have problems with payments. “But I have only seen one side.”

Levin’s wish to engage directly with the farm was largely borne out of the negative rumours which plague the labour hire contractors who source much of the backpacker employment across the nation. But his co-workers Alexia Lebret and Oceane Brunet reported a more nuanced perspective. They began work directly with a farm but soon left to chase employment via the contractors they’d met around the caravan park. “We chose to leave the farm and work with the contractor because with (our) farm, you are paid per bin and with the contractor, it is easier to say you want work paid per hour,” Alexia explained.
“But with the contractor, you don’t have this feeling of working with a good supervisor from the farm on the field who is friendly and you feel some connection with them.”Of course, it’s a hard thing to say because you have bad points with both and you can find good people in both farms and contractors.”

All four backpackers were sad to leave Gatton – though Matthew would always carry a tattoo of the town’s postcode on his left elbow.

The Bad
However, it was necessary for the backpackers to leave the Lockyer as a combination of storm activity and rising temperatures brought increasingly unreliable pay packets. Work days were cut short and cancelled altogether, while accommodation bills stacked up and began to chip away at their savings. “I thought too that I could earn money for our next road trips and travel the east coast but I’ve not been able to save almost anything in four weeks,” Levin said.

“It didn’t make me think I wasn’t in a good place (for farm work) because I was already thinking it could be like this, that maybe it’s not the best job and you might not even be able to make money. “I was hoping to earn money though.” Irish holidaymaker Saoirse warned backpackers to check their rate of pay with employers, after a disheartening experience with a Lockyer contractor picking vegetables at a low piece-rate wage while being charged disproportionately high rent.

“I’m not saying this is the experience across the board, but I found this person was just openly taking advantage,” she said.
“They did it knowing it’s impossible to earn enough to live, without killing yourself, and especially with the extortion rate of rent. “Being paid per bin, you had no incentive to stop and drink water or put sunscreen on because that’s time you could spend picking, and if you didn’t fill your bin at least halfway, it didn’t count for any money. “There were people earning about $40, sometimes less, per day.”

Lockyer Valley councillor Michael Hagan explained stories like these were the council’s reason for setting up their monthly barbecues, where visitors could receive information about their rights and were encouraged to speak out against unfair working practices. “Accommodation and information were identified as problem areas for backpackers around here,” he said. “We decided that we should be doing something to help these guys and started these evenings as a way to inform and make them aware of what’s right and what’s not.”

Lockyer Valley Growers president Michael Sippel also acknowledged the need for industry members and groups to call out poor behaviour, but pointed out workers with bad experiences might have flown in with the wrong idea. “It’s a continuous work in progress but I think there does need to be better education for the backpackers before they get here,” he said.

“It’s physically hard work, but they’re getting rewarded to do so and they’re not here to lay around and get a suntan. “A lot of the jobs are out in the sun, it’s not always fun and it’s not necessarily glamorous, but all of that said, not every farm is going to be the same and some workers will have bad experiences, and there is always going to be potential for improvement in weeding out some of those rogue contractors.”

But Saoirse has still left Gatton with resentment and urged the industry to take exploitation claims seriously. “It’s sometimes hard to explain to people that you’ve been taken advantage of because they just said ‘Oh, stop your whining, it’s for an extension on your visa’,” she said. “That’s why I got frustrated, because I felt like it was letting people take advantage of you.”

The Upshot
Nation-wide, more than 200,000 backpackers are employed annually through the Working Holiday Maker program….

More reading at the source