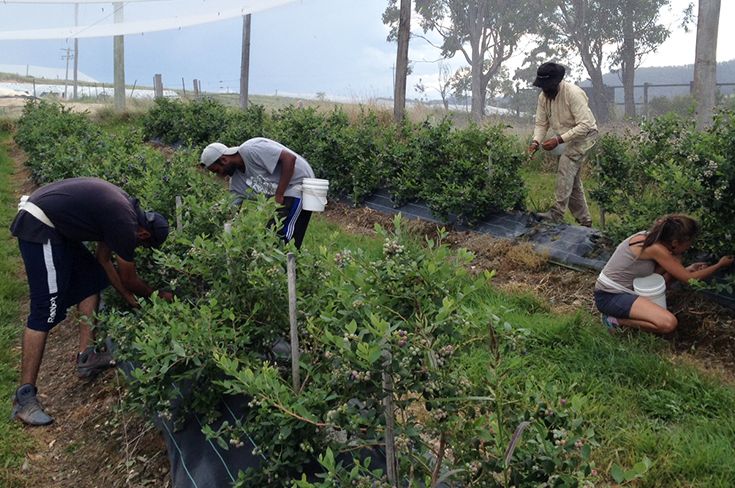 Australia’s largest grower-owned blueberry cooperative has upped its determination to employ local workers, using labour-hire firms and moving away from using backpackers as COVID-19 forces the sector to rethink safety.

The move was prompted by the industry’s representative body, the Australian Blueberry Growers Association (ABGA).

Government guidelines require visa holders leaving a metropolitan area to have filled out a disclosure form.

“We back that up with very clear recommendations to our members that they have worker disclosure forms and run through a daily checklist,” ABGA Chief Executive, Rachel Mackenzie, said.

“They need to know who their workers are, where they are staying and who they are interacting with.

“We are also really advocating to our growers put their job advertisements on the National Harvest Labour Information Service rather than just have workers turning up.”

Moving from backpackers to local hire

The workforce at the plant increases at harvest time to process the fruit.

For the first time OzGroup, in concert with a labour-hire firm, has implemented a strategy to source as many local employees as possible and operate shifts differently.

CEO Adam Bianchi believed it would go a long way to mitigate potential COVID-19 problems, although he conceded it would result in added costs.

“This year we are looking at doing a bit more in terms of segregating to a day and a night shift, so we will have four separate crews,” Mr Bianchi said.

“We think it’s a necessary cost.”

OzGroup hoped a greater emphasis on local employees would develop their skills, which could then be utilised over the years instead of having to spend time training backpackers.

Many of the farms are family owned and reliant on backpackers to complement the handful of fulltime workers.

At Corindi, north of Coffs Harbour, Harvey Singh‘s picking is starting later than last year which he puts down to drought.

With 22,000 blueberry plants to be harvested, the job of finding pickers was made harder because travellers had to isolate for 14 days after coming into the area.

Harvey Singh said he asked all his workers where they have come from.

“Most of them have been saying they have been in the region for a couple of weeks now,” he said.

Raspberries are nearing the end of harvest but are not as hardy as blueberries and much of the packing is done in the paddocks.

“We have already had to make changes with social distancing with our packing stations … but so far it has been manageable,” Mr Lehl said.

Despite the effort to employ locals he is doubtful that many locals will sign up.

“They have been with us for years.”

While growers, processors and industry work to ensure COVID-19 guidelines are adhered to, the ABGA has also tried to reassure the community that all possible steps have been taken.

The ABGA admitted the challenge also is to try and ensure workers behave when not on-farm, so they are meeting councils to talk about accommodation and clear messages for backpackers.