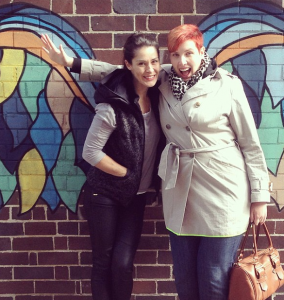 A young Belgian tourist who was brutally raped after being in Sydney for just two days last November has returned to Australia following a heart-warming act by local Kings Cross residents.

It had been 25-year old Kirsten Vanhenenrijk’s dream to visit Australia and she was planning to stay for about a year on a working holiday visa. On her second day in the country she was attacked and sexually assaulted in Sydney’s Kings Cross. She was so traumatised she left Australia immediately, never wanting to return.

After struggling to cope with the ordeal back home, one day Kirsten received an email from the Belgian Embassy advising her that a woman in Sydney had sent a photograph to them hoping they would pass it on.

“The photograph was of a group of people – women, men and children- standing together smiling at me and all I saw was love. I didn’t really see that they were standing in the alley I was attacked in,” she said in an interview with women’s website, Daily Life.

The woman who organised the picture was Claudia Bowman, who lives just 200 metres from the scene of the attack. The message was that the community was sorry for what had happened and they wanted her to know that they cared. The two women then started an email friendship.

“It was my first positive association with Australia,” said Kirsten.

“I began to think maybe I could return one day and have the adventure I had set out to experience the first time. So when Claudia asked me to come back I accepted her offer because it was something I needed to deal with again and I also needed closure.”

In July, she decided to come back and give Australia a second chance. A month after her travels, she said she can’t deny that she’s fallen in love with Australia’s charm. Although she said she was nervous about coming back to Australia, when she arrived Claudia was waiting for her at the airport.

“It was like coming home to family,” said Kirsten.

Claudia had sent out messages to the community informing them of Kirsten’s arrival and people opened their homes to welcome her.

“I have been given experiences, have been fed and taken out and shown how wonderful this city really is. I have been treated with such love. It’s overwhelming. Australia is a great country. It is everything I imagined it to be and more.

“What happened to me is awful, I still have bad days and I will carry it for the rest of my life, but this thing does not define who I am. The people in this community have restored my faith in humankind.” 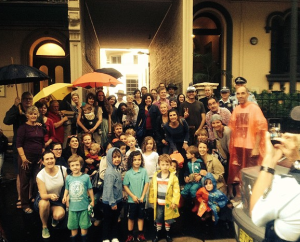 Image: The photo Claudia Bowman sent Kirsten of the local community at the Kings Cross laneway where she was attacked. Credit: Daily Mail Australia.

Feature Image: Claudia Bowman (left) encouraged Kirsten Vanhenenrijk (right) to give Australia a second chance after she was raped on the second day of her first trip last November. Credit: Daily Mail Australia.