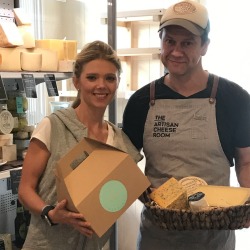 A Sydney mum has created a new app that aims to tackle food wastage with hospitality businesses and thrifty backpackers set to profit the most.

Technology innovator Megan Rohleder (pictured) from Sydney’s northern beaches has founded Too Tasty To Throw – 2T2T – after becoming increasingly aware of how much food she was wasting and how much money she was spending feeding her young family.

“Australians waste four million tonnes of food per year, which is costing the economy $20 billion each year. As well as the obvious financial costs, disposing of this mountain of food waste is producing greenhouse emissions and contributing to climate change. I think people are genuinely concerned about food wastage and this app provides one way to help address these issues.

“It’s a win for the local cafes and restaurants by increasing their takings, a win for the customer by saving them money and a win for the environment by reducing our carbon footprint,” she said.

The app, which launches next month, allows food outlets to add surplus produce to the “Too Tasty” menu board, including a photo, and informs users of their nearest food outlet using GPS functionality on their phones. Users choose and purchase their food items via the app and then collect their order from the food outlet within an agreed time period, by presenting an electronic receipt.

“I definitely see backpackers as a key market for Too Tasty To Throw,” Megan told The Byte.

“Backpackers today are tech savvy and want access to convenient healthy food on the go, especially given they have limited resources available to prepare food themselves. The Two Tasty To Throw platform will in time have national coverage providing backpackers with a one-stop shop to find convenient, healthy food from lifestyle branded food outlets at reduced prices.”

Megan came up with the idea for 2T2T after working in a bakery in the UK which chucked away bucket-loads of good produce. Having been a backpacker in Oz herself (she moved here 8 years ago) she knows first hand how expensive dining out is in this country.

“A key concern for the Australian tourism industry is the continuing strength of the dollar versus currencies like the British Pound and the Euro, which has meant that Australia has become more expensive for travellers coming to Australia from the UK and Europe,” she said.

“The Two Tasty To Throw platform will assist backpackers in reducing their food bill and lessen the impact of a stronger Australian dollar, which will provide backpackers with the opportunity to spend those savings on experiencing the wonders Australia has to offer” Megan added.

One of the reasons why cafes and bakeries throw out bucket-loads of stock is not laziness but the health and safety barriers in being able to pass this food onto consumers.

“One of the main issues we found local food outlets and sole traders had from our initial research was inefficient stock management systems and barriers preventing them from recycling food such as the distance from recycling depots, in addition to the costs involved in disposing of food waste,” she said.

“We will only allow high quality lifestyle branded food outlets on the platform,” she added.

The app allows local food outlets a platform that is free to use with no contract required and no requirement to sell a minimum amount of produce. Furthermore, it’s a great marketing opportunity for businesses who want to reach out to the local market.

“The Too Tasty To Throw platform provides an opportunity for the food outlets to capture a large customer base that is continually changing year on year, as new backpackers visit Australia. This will increase the food outlets revenue, profitability and viability going forward,” said Megan.

Both cafes and diners can register ahead of the launch at the website tootastytothrow.com and how can you as youth tourism businesses (esp. hostels) get backpackers onto the app?

Sounds like win-win, what do you think of the new app? Have your say.