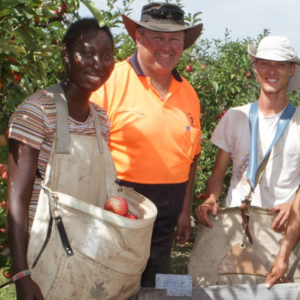 News that foreign backpackers are launching a legal challenge to federal tax law will bring no comfort to the state’s growers.  The so-called backpacker tax under challenge came into force in 2017 and affected all working holiday visa holders. By all accounts, the inception of the law was a mess, with the federal government back-tracking on its initial tax rate of 32.5 per cent to settle on 15 per cent.

That was after a clamour from the affected sectors, which the government had failed to consult. Industries such as primary producers, hospitality and tourism, which relied heavily on seasonal workers, warned it could have a disastrous effect. It is ironic that the Tasmanian state government is specifically targeting those sectors for incentives to support their growth and sustainability, while the federal government seems to be marching in the opposite direction.

Growers are already voicing their concerns about finding enough workers to harvest produce this autumn. With a gradual decline in the number of locals prepared to work seasonally in hard jobs, the tax must have seemed like a real thorn in their sides. What the federal government has apparently overlooked is some of the detail in the many trade agreements the nation has signed with other countries.

A US-based tax accounting firm is arguing that it breaches non-discrimination clauses in tax treaties which Australia has signed with Britain, the US, Germany, Finland, Chile, Japan, Norway and Turkey. The firm lodged the challenge in Queensland in early December last year, on behalf of individual clients from Britain, Germany and the US. The legal case aims to make citizens of the eight countries exempt from the law, meaning backpackers from other countries would be relatively even worse off – a seriously uneven playing field.

If successful, the legal action would snip back the amount the government raises from the tax – currently estimated at about $150 million. Meanwhile, growers are scanning the horizon looking for workers and relief.

The federal government threw a sop to the industry in the way of a Seasonal Work Incentive Trial, but it’s hard to say how successful that has been. If the legal challenge succeeds, it may lead to tossing out the tax altogether. But by then, another season of stress will have passed.