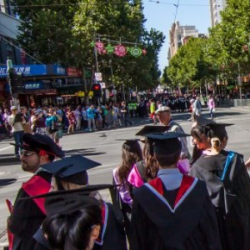 As of March 2017, there were 480,092 international students in Australia – a notable 15% increase from the same period last year. China, India, Malaysia, Vietnam and Nepal each saw increase in the number of its nationals currently studying in Australian universities now, with China showing the biggest growth in numbers. These five countries now make up 54% of the total international student cohort in Australia.

“In 2017, Australia hosted a record number of international students as more than 550,000 students from over 190 different nations flocked to our shores,” Education and Training Minister Simon Birmingham said.

“We are on track to see another record year for Australian international education.”

International education brought in a record $20.3 billion in export income for Australia in 2015/16, an increase of eight percent from the previous year. This makes it the country’s third largest export, behind ore and coal.

In terms of enrollment, there were 520,737 international enrollments in March 2017, the bulk of which were in higher education (54 %), followed by vocational education and training (VET) (23 %), English Language Intensive Courses for Overseas Students (ELICOS) (14 %), non-award (six %) and schools (four %).

“This is a significant increase compared to the same time in the previous year and symbolises the efforts Australia has undertaken to attract international students.”

The education of international students generates a total $22.4 billion (US$16.7 billion) in income for Australia each year, with universities contributing $15 billion (US$11 billion) of that to the national economy.

For Universities Australia chief executive Belinda Robinson, the new data shows how Australia’s high-quality university system contributes to the country’s economic well-being. She cites this as one reason why the government’s latest reform package, which slashes funds to universities, must be scrutinised by lawmakers.

“That’s why proposed cuts to university funding have to be considered so carefully by the Parliament. Any erosion in the quality of our higher education sector would diminish both the education of Australian students and jeopardise this enormously important export sector,” Robinson said.

“Quality is our draw-card,” Robinson said. “We must guard it wisely.”